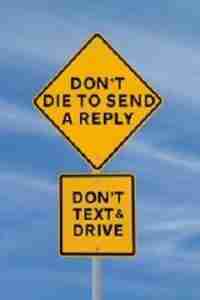 This week, a man was shot and killed because he was texting in a movie theater. You can read the story here.

It’s a horrific incident that should elicit more surprise than it does.  When I heard about it I was deeply saddened, and at the same time  it wasn’t shocking. You could almost see something like this coming, somewhere, sometime.

Texting is a handy tool that can also inspire annoyance, anger, even rage.

I’ve seen people on airplanes get increasingly agitated when the person seated near them continues to text after the flight attendants have asked everyone to turn off  their portable devices, delaying push-back from the gate.

I’ve witnessed people in meetings get annoyed at co-workers who text throughout a meeting – all the while the texter is thinking no one knows because the phone is in their lap rather than on the table.

Seeing people texting while driving is infuriating.  How can they be so selfish and careless? What is that important or urgent?

What about people who continue their phone conversations while interacting with a cashier.  How dismissive to the retail worker!

I’ve gotten annoyed when someone continues to text or play games when I’m talking to them. In fairness I know there have been occasions when I’ve done that same thing myself – to the annoyance of people talking to me.

How do we navigate the unwritten rules about when and where it’s OK to text? To talk on the phone? (Cell phones conversations allowed on airplanes? Heaven help us.) Further, technology addiction is real (www.virtual-addiction.com) as many find it impossible to curb their own use of their devices even if they know it’s creating a problem.

I’m curious about your experiences.  Have you ever been involved in or witnessed a battle over the use of technology?  What happened? Was it amicably resolved?  If so, how?

Vigilant consideration is wise option. If there is a chance that the use of the gadget could be rude, disruptive or annoying, put it down.

About that incident in the movie theater. Nothing justifies what the shooter did.  And if the man texting had either put the phone away or gone to the lobby, he’d likely be alive today. A senseless tragedy that will be repeated if we don’t choose wisely.