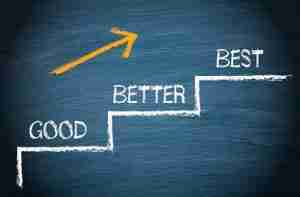 In a recent meeting, a colleague (we’ll call him Mark) mentioned that his client (Brian) a great guy in many ways, could use a coach in a specific area. Mark asked how to bring up that Brian would benefit from working with an executive coach without it being awkward or insulting. The answer lies in changing Mark’s perception of who an executive coach works with.

Here are a couple of analogies. Which athletes get a private coach? The worst ones or the best ones?  Two students are learning the violin. Does the prodigy get a coach or the kid with a tin ear who won’t practice?

You see, executive coaching is for people who are already good, successful, driven and development-oriented. That describes every one of my clients (though many are fantastic, not just good).

Anyone at the top of their game in business, sports, music, etc., knows there isn’t really a top. Improvements can always be made. I’ve been a coach for a long time but I still work nearly every day to be a better one.

If the person you think needs a coach is circling the drain, they don’t need an executive coach. They need something or someone, but probably not a coach.

Telling someone they should consider hiring a coach to boost a particular skill is a vote of confidence. You believe they’re already so good that their investment of time and money will be worth it. On their quest for continuous improvement, outside support will catapult them to an even higher level of success.

I don’t fix people. We collaborate to kick things up a notch or two in whatever area(s) will have the most impact. Nothing awkward about that at all.

If you’ve been thinking about a coach for yourself but you’re not quite ready, a good first step is signing up for my Minute Shift.  A weekly helpful tip that takes under 60 seconds to read.