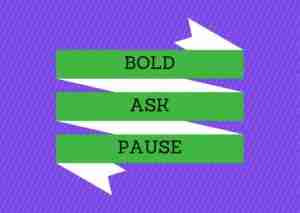 Yes, I’m writing this after we’re two months into the year.

A number of years ago I learned about a different kind of New Year’s Resolution from Chris Brogan. Rather than make a sweeping promise about some big change to make starting January 1st, he suggests choosing three words to guide you through the year. I’ve done that for the last few years.

And I did it this year. I’m writing this now because unlike a resolution, those three words for 2017 and the actions I’ve taken because of them are still going strong. Two months after I made the commitment.

With those three words staring me in the face every day, I make decisions about what to do and how to think based on what they inspire me to do. Here are my three words for 2017.

Bold – When in doubt take the bold action. Fear and progress-halting uncertainty have no place in a successful business. Or life for that matter. When I’m faced with a safe and a bold option, take the latter.

Ask – Ask as much as I can in as many situations as possible. Curiosity is important in every aspect of life. Plus, it makes life interesting! As a young child I was told it was rude to ask too many questions and unfortunately that stuck with me. But I’m sure the same parents would give very different advice today. So I ask…

Pause – The world is just fast and getting faster all the time. But faster often isn’t better, Just more stressful. So I’m making a point to pause throughout the day. I’m working very hard on this is during conversations. In order not to interrupt, I aim to pause for 3 seconds after the other person stops talking before I start talking. It’s hard, but important. So, I’m committed to practicing it every day. By the end of 2017 I’ll have made significant progress.

So those are my words for 2017 and they’re making a powerful difference in my year. If you haven’t done this before, go ahead and give it a shot now. It’s never too late to start making this year one of positive change.