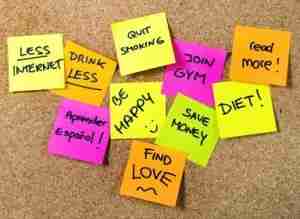 By now many New Year’s Resolutions have already gone by the wayside. Which may be OK.  Because if the resolve is history already maybe you didn’t really want it as much as you just thought you were supposed to want it.

Take smoking. My Dad tried to quit smoking several times and was even successful once, but the truth was he really didn’t want to quit smoking.  He enjoyed it. And he especially liked the camaraderie of taking breaks with his buddies at his volunteer job at the Botanical Garden. Sure, all the evidence says that you shouldn’t smoke, but just because it’s not good for you is not necessarily a compelling enough reason to stop doing it. It’s your life.  Do what you want with it. What’s the point of making resolutions about changes in behavior that you really don’t care that much about?

On the other hand, maybe you do care about that new behavior. If your resolve has already faded, who’s to say you can’t pick up that resolve today?  There’s no magic in starting on January 1, or the first of any month for that matter, or on a Monday.  Start right now, in this moment. And here are four ideas to make sticking to your resolution more likely.

Make it small  Maybe just get 15 more minutes of sleep a night or drink two more glasses of water a day. Both of things would have a good impact on your well-being. Small is do-able.

Make it short term  It can be overwhelming to commit to doing something for an entire year.  What if you just did something for a month? For example, commit to use the stairs whenever possible during that month. Or try something for a week.  Say, clean off your desk at the end of every day for one week and see how it makes you feel. If it makes a significant difference in your energy level or how much more organized you feel, commit to another span of time.

Make it fun  Who says you have to resolve to do something to “fix” you?  How about committing to watching a great classic movie every week. Or taking in some live music or an art show every month.

Make it less lonely  Pair up with someone to help each other stay accountable.  You can either have the same goal or not — but you know the other person is there to help you stay focused and on track.