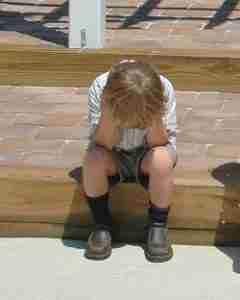 But words can never harm me.

To that I say, what a load. Words have a powerful ability to cause harm. Duh.

See what I mean? Looking at it in black and white it’s rather startling to see how we berate ourselves.

Do you have children? If so, think of one of them at 3 or 6 or 13 years old.  No children? Picture one that you know and care about.  Now imagine this child is standing right in front of you waiting to hear the next thing you’re about to say.  Ever, in a million years, would you say any of those terrible things to that child?

So noodle on this.  We were all once that age. Today you’re the same person essentially, just with a few more candles stuck in the frosting. Don’t you deserve the same compassion, love and respect that you would give to that small child?

When you catch yourself saying such a thing, think about yourself as a kid and rephrase it to something more positive. And then head out to recess.