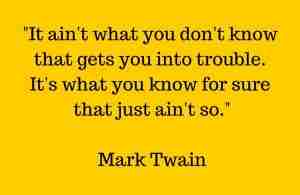 Before we talk about terrible bosses let’s talk about terrible singers. Have you ever watched one of those singing competitions? You’ll hear an audition that sounds like a catfight on a chalkboard and think, “Does this girl seriously think she has a chance in hell to win this!?”

Turns out that tone deaf contestant may very well think her singing skills are superb. It’s the Dunning-Kruger Effect, which is defined this way: “A cognitive bias in which relatively unskilled persons suffer illusory superiority mistakenly assessing their ability to be much higher than it actually is.”

Dunning-Kruger Effect explains what’s happening when a student thinks she’s done really well on a test but in fact has done quite poorly. The same skills that were used to take the test are used to assess her own performance on the test. She is consistently less skilled than she believes herself to be whether she’s taking the test or speculating on how well she did on the test.

Back to the terrible boss. He thinks he’s a good manager, but is wrong about that. Because he thinks he’s good at it, he’s less likely to seek out professional development opportunities to improve his own performance. Dunning-Kruger can also explain his inability to assess the performance of others (you) accurately.

So how can this information make you feel better? Often the frustration of having a bad manager stems from the idea that he is trying to make your life miserable while willfully disregarding his own shortcomings. If this Effect is in place, he may truly have no idea how bad he really is. Small comfort maybe, but some comfort nonetheless.