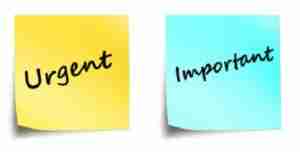 You may be familiar with The Eisenhower Box. (Though it’s often referred to as Stephen Covey’s Time Management Matrix because many years later he popularized it in his book 7 Habits of Highly Effective People. No mention of Eisenhower in that book. Looks like two smart guys came up with the same smart idea. Nothing new under the sun, they say.) If you’re not familiar, here it is… 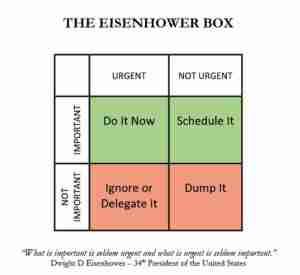 The idea is that everything you do, business or personal, fits into one of these boxes. Some examples of what kinds of tasks that go in each quadrant.

URGENT and NOT IMPORTANT
• Some phone calls
• Some meetings
• Scheduling appointments

Good leaders and the highly accomplished – Eisenhower qualifies on both counts – are generally those that spend the majority of their time in the Important and Not Urgent quadrant.

Adrenaline junkies, poor planners and those who work in poorly managed organizations spend the majority of their time in the Urgent and Important quadrant.

The Urgent and Not Important quadrant is also a favorite of the adrenaline junkie. And it’s also the primary quadrant for people who are ruled by the phone and the calendar instead of managing both to their advantage.

People who spend the majority of their work time in the Not Urgent and Not Important quadrant get fired a lot. Usually not all that successful in their personal life either. Hope you don’t see yourself in that box.

Note that I specify the “majority” of their time in each of these descriptions. It’s almost impossible not to spend some amount of time in each quadrant and that’s OK.

The idea behind the Eisenhower Box is simple really. Where do you want to be? You can orchestrate your life so that you spend most of your time in the upper right, minimize time spent in the upper left, shift your responsibilities so others are handling lower left tasks, and still have time to enjoy hanging out in the lower right a bit.

If you need ideas about how to do that, I share my best ideas with subscribers and you can get in on that deal – for free – by signing up here.

PS. Since this post was written many moons ago, it’s also come to my attention that this isn’t really the invention of Eisenhower either. We may never know who made it up. But no matter, it’s the point that counts.