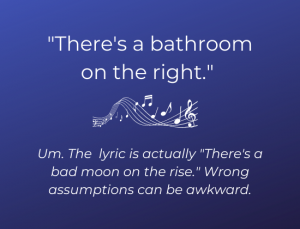 Have you ever received an email or had a conversation where what the other person was saying to you had you scratching your head thinking, “How in the world did they get that impression from me?!”

Incorrect assumptions have happened to me several times recently. One was a rather upsetting message suggesting that since I hadn’t replied to an email I must be horridly offended and wish to cut off the friendship forever. In another case I posed a question and was met with a wildly inaccurate assessment of why I would ask that question along with many pieces of advice about how to handle my (non-existent) issues related the reason I asked it.

It bears saying that no harm was intended by either person. In fact, the reason for their assumptions in both cases was care and concern. Good people with good intentions.

The gist of this post is that both situations could be avoided by asking clarifying questions instead of making assumptions.

In the case of the email – not proud to say it’s not the first email that’s gotten buried, unread in my inbox – a second email was an option. How about, “Hey, did you get this? Not like you to not respond. Hope everything is ok.” That email could save the sender a lot of grief thinking he had unknowingly offended me so intensely so as to cut him off without a backward glance. Of course, there’s a chance that a second email goes unanswered, too.  Which if the roles were reversed and my emails were going unanswered would prompt me to call. Mostly to make certain he wasn’t trapped under something heavy and unable to respond. (When Harry Met Sally reference.)

About the interpretation of question and the accompanying advice – a more productive option is to ask a question. “It sounds to me like you’re feeling ________. Am I correct in that assumption?” Once assured the assumption was incorrect, a different more relevant conversation takes place.

With our brains, often the first thought remains the only thought. So certain what we’re thinking is correct,the notion there may be another explanation doesn’t even come up – much less get considered.

How to avoid it

When you assume, ask yourself, “Is there any possibility – even a slight one – that there could be another interpretation?” When the answer is yes, ask clarifying questions instead. Save yourself and the other guy time and trouble.