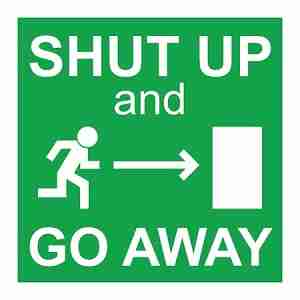 Know when to shut up. Of all the communication skills you can develop, knowing when to “zip it” can come in pretty handy.

Sometimes, despite all the evidence to back up your viewpoint, and in spite of the obvious flaws in the other person’s way of thinking, (Said with more than a hint of sarcasm.)  it just makes no sense to press the issue. The other person may not be in a place to listen to, or comprehend the superior brilliance of your argument.

Verbal and nonverbal clues alert you that the other person isn’t going to budge, or even engage in a civil debate. Verbal cues such as jumping in to refute your point before you’re finished or a terse tone.  Non-verbal cues such as shaking of their head while you’re talking, eye rolling, refusing to make eye contact, a smirk.

Pay attention to what the other person is doing and saying so you can know when to button it and save both of you from certain frustration, possible anger or worse, a day-ruining confrontation.