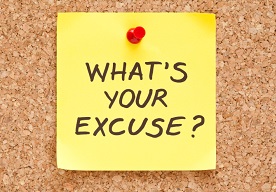 (And maybe look a little crazy.)

I’ll spare you the storytelling set-up paragraph. If you found the title intriguing enough to get this far you can probably tell your own story about how frustrating it is to procrastinate. Here are two steps to stop procrastinating.

Explain to yourself why you want or need to put this off.  Make those excuses good and plentiful.  For instance:

Surely some of them sound familiar (I’ve used ’em all.) and you may have more of your own.

Step 2: Listen to Yourself

The key to this exercise isn’t in the talking, but in the listening.  Listen to yourself as if the voice were coming from some other person sharing those excuses with you.  Maybe a co-worker or colleague is saying them. Perhaps a child or teenager. If someone you care about said those statements to you, how would you respond?  Maybe something like this…

See how it works?  You end up having both sides of the conversation and can rationally see that the excuses don’t have much validity. I know that you know this stuff but reminders are what get us moving in the right direction when we’ve veered off the productive path and into procrastination.

Try it! Let me know how it works for you.

Posted in Procrastination and tagged Homepage