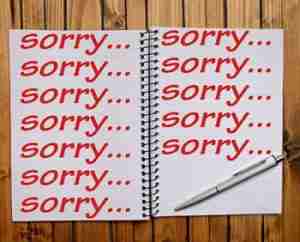 I did a regrettable thing. A deadline loomed and every ounce of my energy was focused on that. Though sometimes distractions win, this time I was in the zone. To make this product outstanding I gave it everything I had.

With the project complete, I heaved a contented sigh and gave myself a couple of hours to deal with less intense stuff. Though still doing work tasks, it was sort of the mental equivalent of slumping into an easy chair. After days of operating in high gear, my brain shifted into low for awhile.

And I missed an appointment.

It wasn’t a work appointment; it was my son’s violin lesson. But it was an appointment. And it was completely off of my radar screen until she called me at what would have been 15 minutes into the lesson.

So, of course, I apologized profusely while admitting my mistake. She was very gracious and understanding and we made arrangements for a new lesson time.

And that’s when it hit me that sometimes an apology isn’t an apology anymore. It ceases to be about genuine regret that I inconvenienced her and becomes all about me wanting forgiveness – over and over again.

When we keep apologizing long after the first apology has been accepted, we put the other person in the awkward position of having to repeatedly assure us that it’s okay. The other person feels obligated to keep coming up with new words to make us feel better about our mistake. Which, frankly, could be more annoying than the original infraction.

My takeaway was that one sincere apology is plenty. One apology says that I regret the inconvenience this caused you. Excessive apologizing says I’m not as worried about inconveniencing you as I am worried about what you think of me.